Ban the Word ‘But’ from Your Vocabulary. 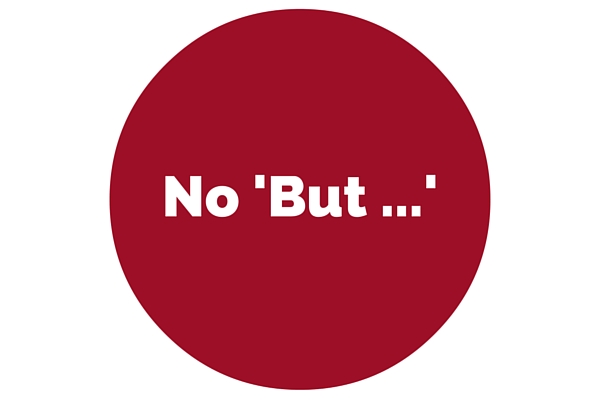 Get rid of the word ‘but’ from your vocabulary.  It’s what’s called a ‘negator.’  Psychologically, it negates, makes ineffective, invalid, and nullifies what came before it and significantly changing the emotional impact of the statement.

Effective and precise use of language is a crucial management, leadership, and sales skill.  You want to ensure you are communicating both the key facts AND the emotions your are targeting in the other person.  The use of the word ‘but’ often goes counter to our intended communication.

Here are some examples:

Or better yet … just be quiet after the positive part of your statement.  (Do you really intend to negate your previous phrase?)

When you first start trying to remove the word “but” from your vocabulary you will be AMAZED at how much the word is just “conditioned reflex”, with remarkably negative emotional and communication consequences.

If you are going to use the word ‘but’ then use it deliberately to negate the negative part of a statement.

Summary:
Remove the word ‘but’ from your daily language.  It negates everything that comes before it.  Usually with unintended negative consequences and emotional impact.